Supporting Self-sufficient “Farmers”... Developing “Good Job Security and Quality of Life”
Agricultural Extension 3 Programs
1 Contract Farming
2 Agricultural Villages
3 ‘Pracharat Community’…the Strong Foundation
Contract Farming
We have been working closely with farmers in “Contract Farming” scheme since 1975 with the aim to promote employment and support income generation among Thai farmers. The essence of the contract farming scheme is the guarantee for secured market and the assurance that contract farms are operated under the same traceable standards as the Company’s own farms. This is to ultimately benefit the farmers by securing their income and to ensure our consumers of safe and high-quality food.
In 2015, we reviewed and improved the contract farming agreement for the benefits of the farmers, the Company, and consumers in line with UNIDROIT principles of the International Institute for the Unification of Private Law, the No.1 independent intergovernmental organization. We were the first company in Thailand that adopted the international guideline in the scheme. 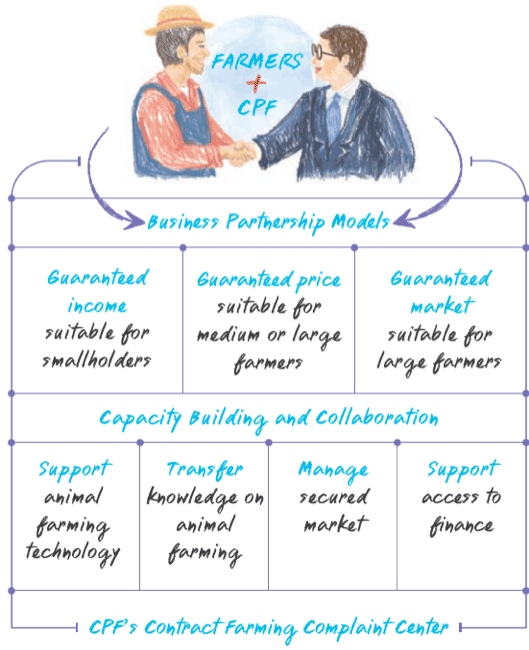 With the management system that aligns with international standards and fair business practices with the aim for mutual growth, the Food and Agriculture Organization of the United Nations (FAO) has organized a study visit for participants from seven countries including Vietnam, Cambodia, Laos,Myanmar, the Philippines, Nepal and Bhutan for three consecutive years since 2015. The study visit gave the opportunity for participants to learn from our scheme and adapt for their own improvement. 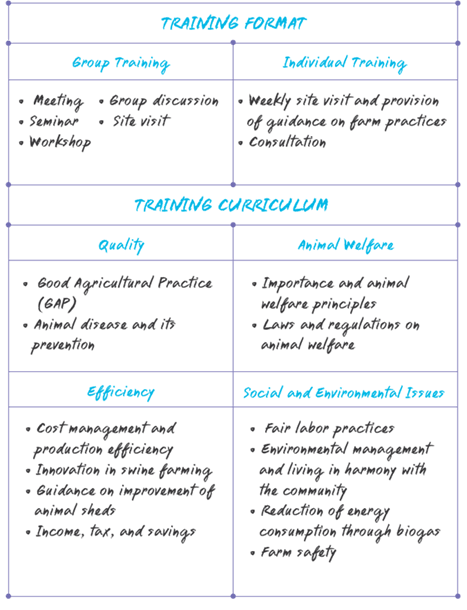 In accordance with the “Partnership towards Kitchen of the World” concept, we also place an emphasis on building farmers capacity on effective farm management and socially and environmentally responsible business practices to create mutual business success. To achieve this, we continue to organize a variety of group and one-on-one training programs for farmers.
At present, there are approximately 5,900 contract farmers in our contract farming scheme for swine, layer, and broiler, 60 percent of which have been with us for more than 10 years. Some of the farmers have stayed with us for 30-40 years. 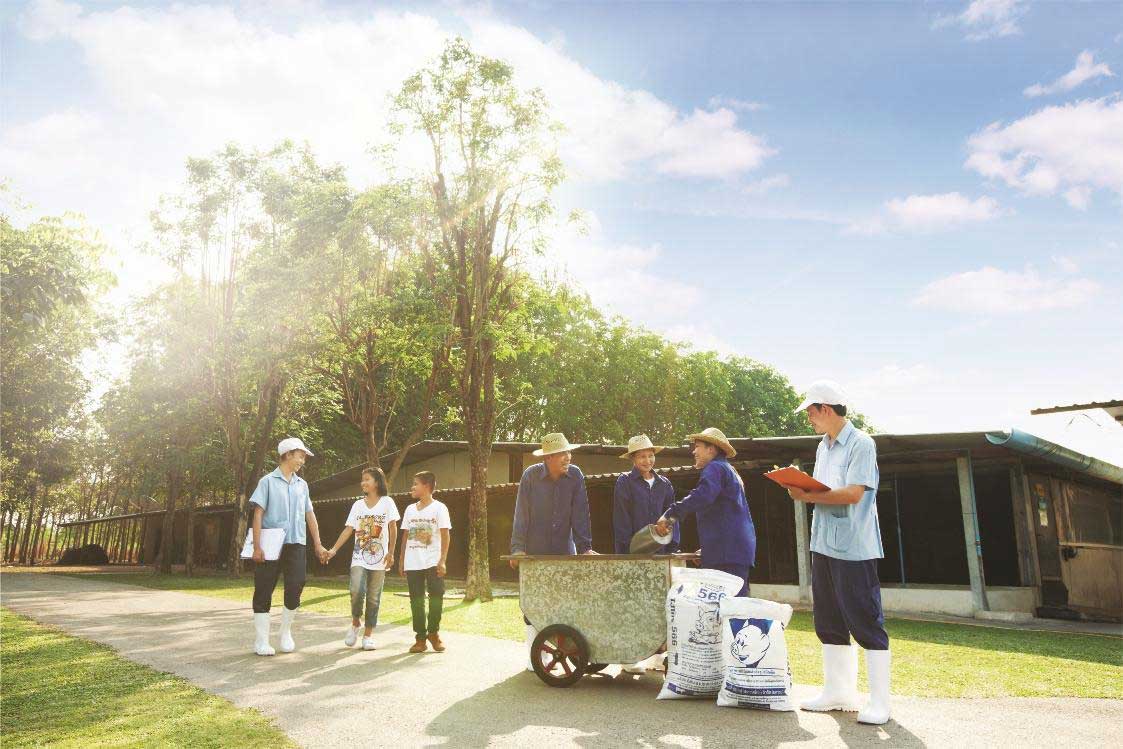 ‘Pracharat Community’…the Strong Foundation
To develop the economy on a strong foundation, the project operated with the collabourations from four parties:
Government:
Phanom Sarakham District Government developed basic infrastructure and selected farmers to participate in the project
Community:
Fifty farmers who passed the selection process participated in the project from January-May 1978
Financial Institution:
Bangkok Bank provided financial support in the form of loans for land purchase, housing, and construction of swine housing. The Bank also provided working capital for swine farming and planting.
Private Sector:
CPF, on behalf of CP Group, distributed land to farmers, provided knowledge on modern farming techniques, transferred technology on animal husbandry, and knowledge on accounting and financial management. We were also responsible for marketing and were guarantor for all farmers.
From ‘Project’ to ‘Company’
Farmers in Nong Wah Agricultural Village mainly does swine farming. It is considered the biggest swine farming community in Thailand. They also have second job that is suitable for the environment and the community way of life. The second jobs include rubber plantation, mango plantation, native chicken farming, sweet bamboo growing, straw mushroom cultivation in closed system, horse breeding and farming, and organic fertilizer ball pellet production. They have the management system that depends on knowledge sharing and participation which help strengthen the community and increase quality of life.
As farmers became self-reliant, they developed the Nong Wah Agricultural Village Project into Nong Wah Agricultural Village Company Limited in 1988. The company has two main objectives namely, to survive the business and to increase income and quality of life of farmers. Every farming household is the shareholder of the company. They elected representative farmers to become the board members whose responsibility is to be the intermediary in collecting produce from members and selling it to business partners. The board is also responsible for sourcing factors of production from external parties and selling them to the members. This model has helped farmers learn more about marketing and business administration for agricultural products.
Secured and Sustainable Success
Concrete indicator for farmers’ success is income. From generating about 2,000 Baht per household per month, farmers now generate approximately 80,000-100,000 Baht per household per month.
Success is not only indicated by having a secured job and stable income, quality of life of farmers and their family is another good indicator for success. Starting from being impoverished and having no land, now farmers have land, assets, and better quality of life. Their children have the opportunity to study as high as they want. Farmers also adapted agricultural knowledge and local wisdom with technology to create innovation that enhance the quality of life and conserve the environment. These innovations include biogas production and organic fertilizer ball pellet production from swine manure.
The success from working diligently and in harmony is also passed on to their descendants as well as to children and youth, educational personnel, and government agencies through a variety of activities including Open the World of Learning with Nong Wah Agricultural Village project and farm stay at Nong Wah Agricultural Village. This has made the village into the model community for farmers’ capacity building.
In addition, in remembrance of His Majesty the late King Bhumibol Adulyadej’s commitment to conserving and restoring forests coupled with our determination to raise awareness on conservation of soil, water, forest, and biodiversity among the community, employees, and farmers, CPF and Nong Wah Agricultural Village collabouratively initiated the “Eco Forest Planting in the Community in remembrance of His Majesty the late King Bhumibol Adulyadej” project. More than 50,000 trees in 109 species were planted across the area of 14 rai. The planting was carried out to imitate the natural process so that the forest could become the learning center for sustainable eco forest.
Kamphaengphet Agricultural Village…Harmonized Village, Modern Technology
Kamphaengphet Agricultural Village Project was initiated to enhance the quality of life of Thai farmers by adopting His Majesty the late King Bhumibol Adulyadej’s thought on land reform in distributing more than 4,000 rai of plain for modern integrated farming at Moo 20, Thep Nakhon Sub-district, Muang District, Kamphaengphet Province.
4 Collabourations and Land Management for Integrated Farming
Kamphaengphet Agricultural Village also operated under the same 4 Collabourations concept as Nong Wah Agricultural Village. The Muang District Office provided basic infrastructure, a total of 64 farming households were responsible for the production, Bangkok Bank provided financial loan, and CP Group together with the subsidiaries were responsible for project management. The land area was divided into 2 zones as followed:
Modern Integrated Farming Strengthening the Community
With the collabouration and strong commitment of CPF and farmers to use modern integrated farming knowledge, machinery innovation, and comprehensive management system in the production process, farmers became successful in their profession. They have stable income from swine farming, their main profession, generating approximately 50,000-150,000 Baht per household per month and from their second job which includes catfish farming, water mimosa farming, vegetable farming, and selling fertilizer from swine manure. This helps farmers generate more than 100,000 Baht per year.
In addition, the community also emphasized environmental and water management through a variety of projects including: 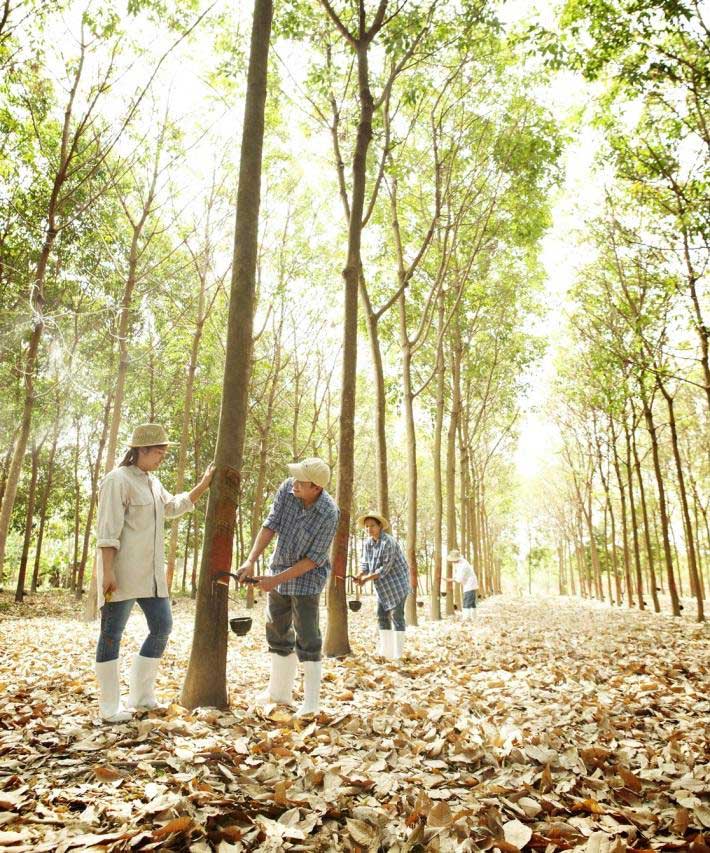 Today all farmers are self-reliant. Every family has good quality of life. The Village is in harmony and continues to develop following the Sufficient Economy Philosophy with the aim for a secured and sustainable happiness and success. 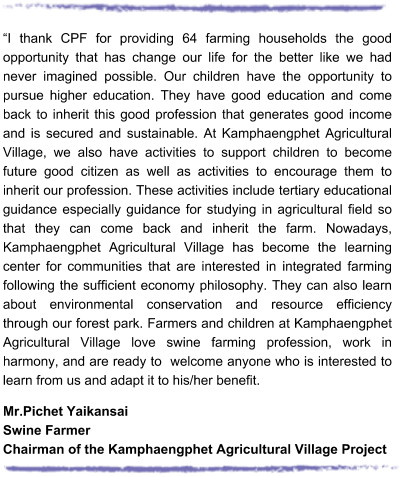 Kaset-Santirat Village
Recognizing the importance of police profession and the quality of life after retirement, in 2006 CP Group and CPF initiated the Kaset-Santirat Village Project at Moo 5 Na Wang Hin Sub-district, Phanat Nikhom District, Chonburi Province. We distributed more than 230 rai of land and supported knowledge and technology transfer on animal husbandry to 31 police officers and their family with the aim to help them generate alternative income and to give them the opportunity to own a house.
Kaset-Santirat Village was made possible by the collabouration from 4 parties including the Royal Thai Police, TMB Bank, Ko Chan District Police Station in Chonburi Province, and CP Group led by CPF. We used the “1 Village 4 Products” concept in supporting income generation and enhancing the quality of life of police officers and their family.
The 4 products come from “3 main jobs and 1 additional job”. The main jobs are vegetable farming, swine farming, and frog farming while the additional job is native chicken farming. The land area was divided into 2 zones as followed: 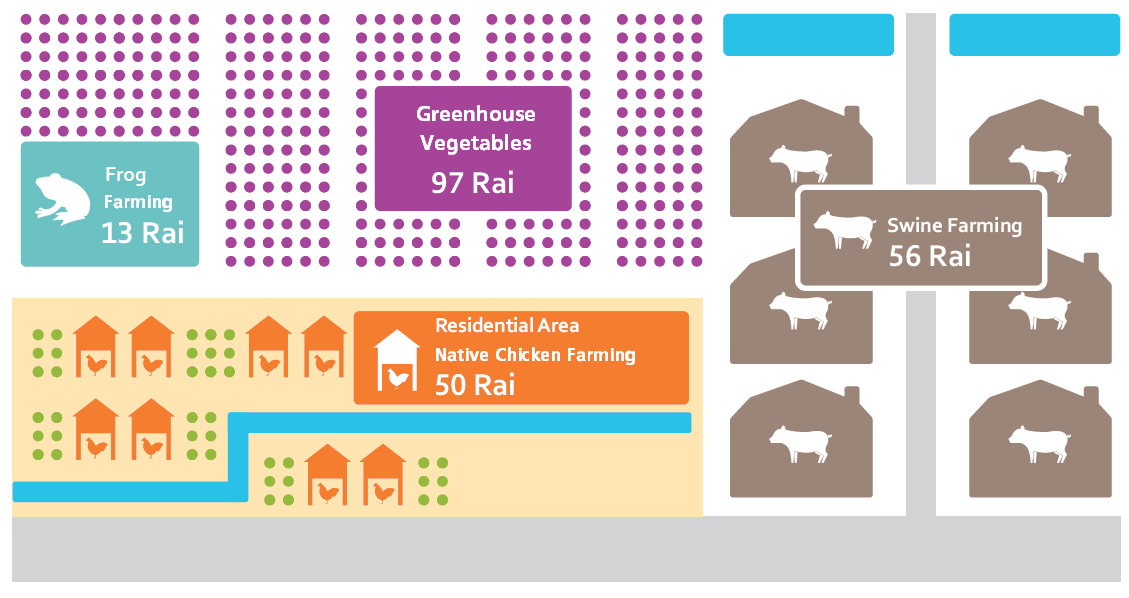 At present, Kaset-Santirat Village has become Kaset-Santirat Company Limited with 31 police families as shareholders. In 2018, the land rights was completely transferred to the police officers.
Smallholder Farmers Support
For four decades, we have been working closely with the Rural Lives’ Development Foundation , under the support from CP Group and our employees as well as other partners, to promote the “3 Good Practices” concept to develop people to become “Good Person, Good Citizen, and Good Occupation”. This is inline with His Late Majesty King Bhumibol Adulyadej’s initiatives on developing people and supporting local employment and income generation. 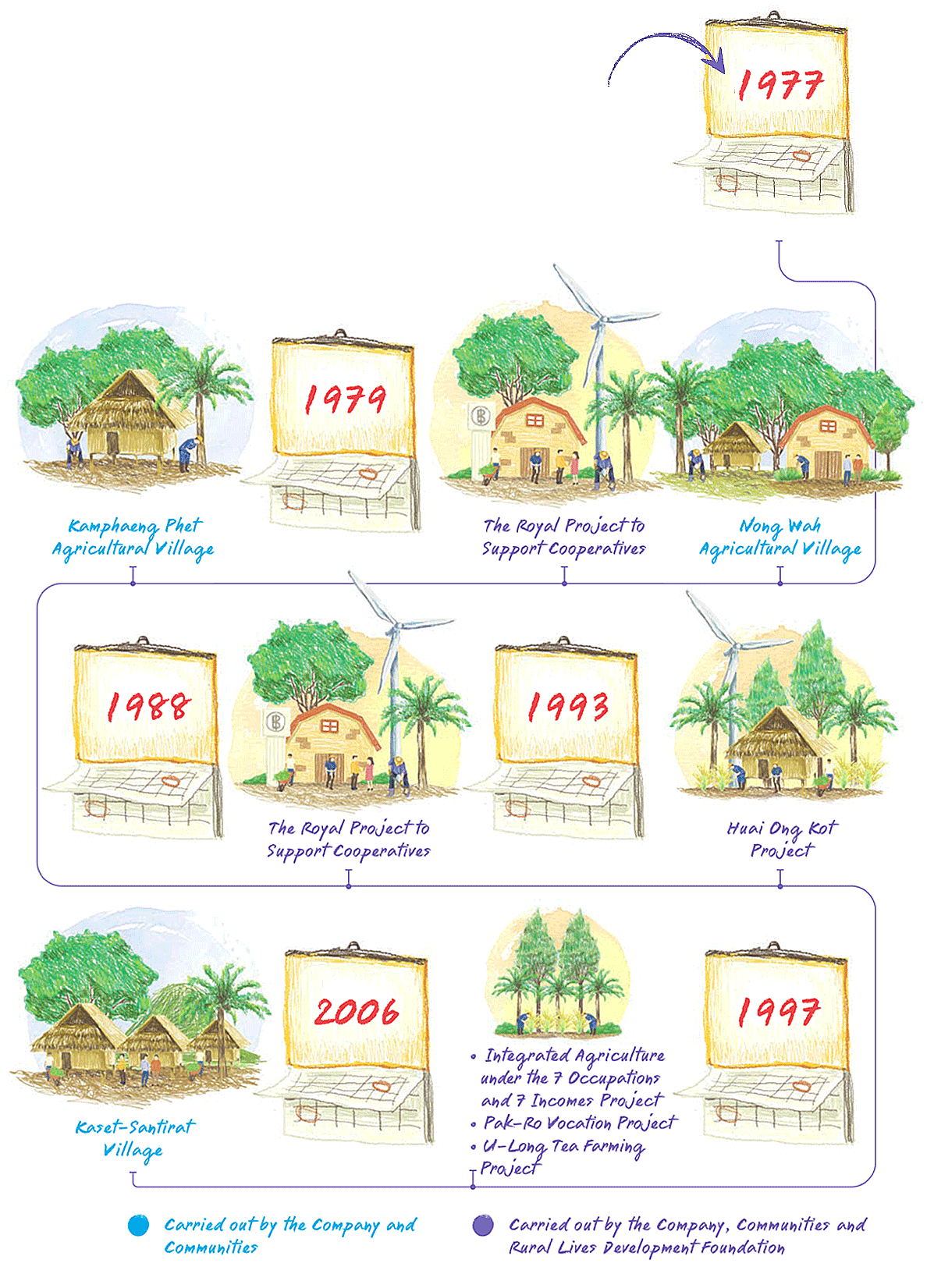 Through knowledge and technology transfer and participation of farmers in the project area, we are able to support more than 10,260 smallholder farmers secure job and have adequate income. We work with them to systematically and efficiently plan for investment, production, and marketing. This created more than 7,015 million Baht in economic value during 2013-2018.
Cooperation of farmers not only helps facilitate farming management but also becomes a model for other communities. 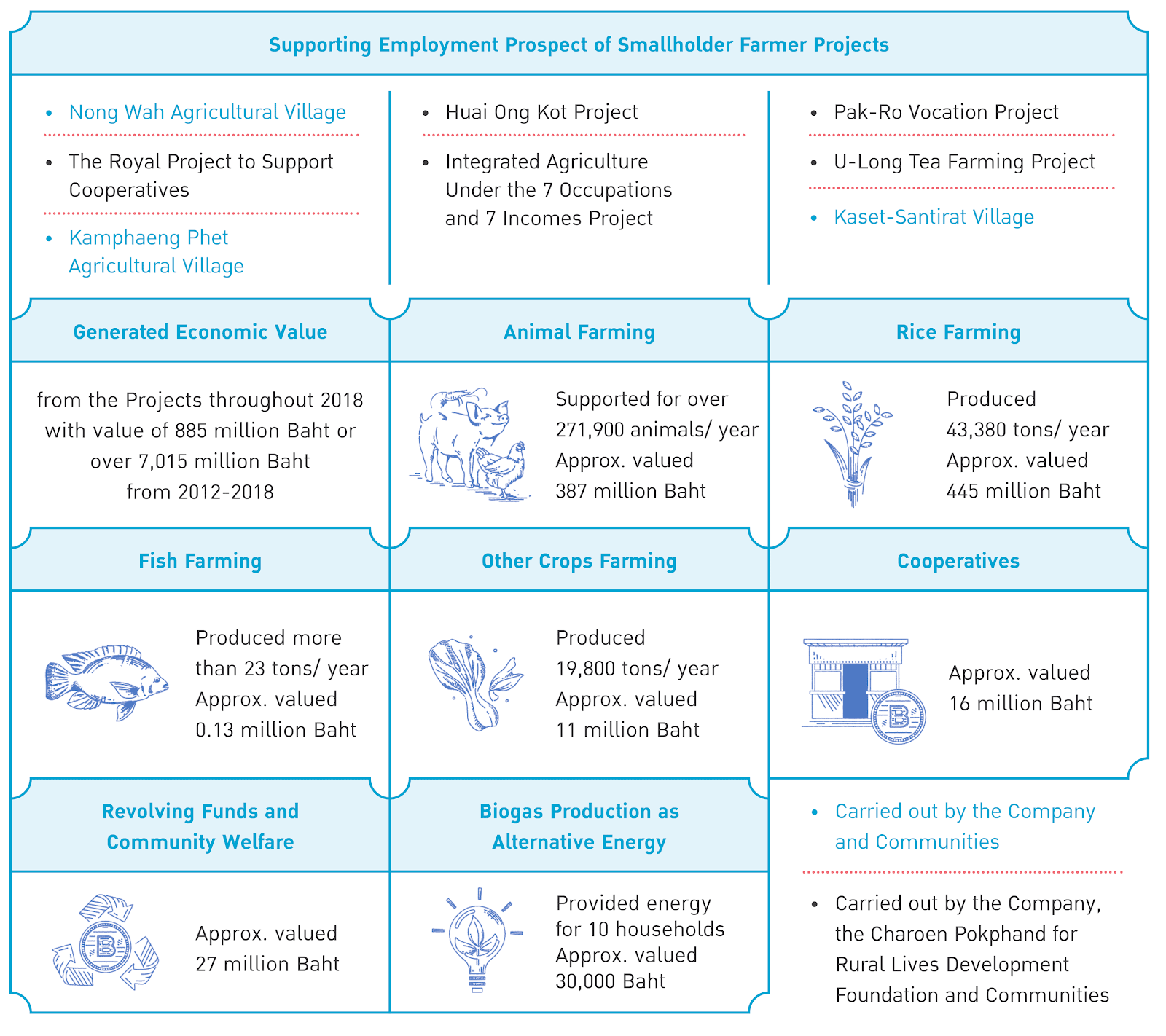 Market Driven for Safe Vegetables Project
In 2018, the Company signed a Memorandum of Understanding (MOU) with Nakhon Pathom Co-op’s farmers under the “Market Driven for Safe Vegetables Project” to supply safe vegetables from the farmers. This Project allows us to source vegetables directly from the farmers and enable us to identify their sources by tracing from the QR-CODE system. The vegetables are produced under the Good Agricultural Practices (GAP) and are sorted and pre-cut following Good Manufacturing Practices (GMP). 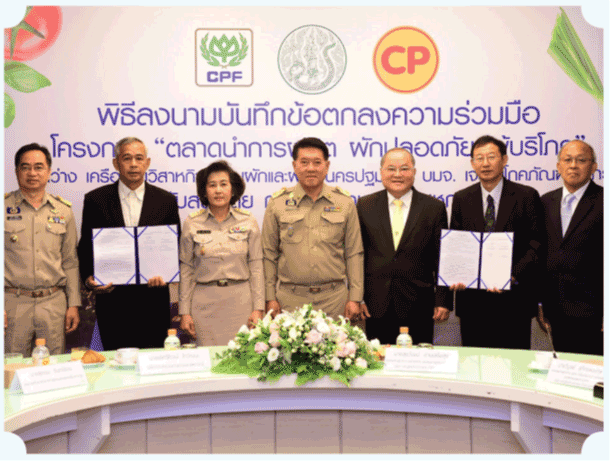 The Project supports Thai farmers to gain sustainable income and employment through provision of a guaranteed market. The Company also provides safe vegetable farming knowledge and supports funding for improvement or development of cutting and packaging plants in the forms of a grant and an investment loan.
Performance
Supporting “Strong Communities”… Creating “Entrepreneurship Opportunities”
Supporting “Vulnerable Groups”… Strengthening “the Society”
Supporting “Social and Community Activity”